What is vitiligo, and what causes it ?

Vitiligo (pronounced vit-ill-EYE-go) is a pigmentation disorder in which melanocytes (the cells that make pigment) in the skin are destroyed. As a result, white patches appear on the skin in different parts of the body. Similar patches also appear on both the mucous membranes (tissues that line the inside of the mouth and nose) and the retina (inner layer of the eyeball). The hair that grows on areas affected by vitiligo sometimes turns white.

The cause of vitiligo is not known, but doctors and researchers have several different theories. There is strong evidence that people with vitiligo inherit a group of three genes that make them susceptible to depigmentation. The most widely accepted view is that the depigmentation occurs because vitiligo is an autoimmunedisease -- a disease in which a person's immune system reacts against the body's own organs or tissues. People's bodies produce proteins called cytokines that, in vitiligo, alter their pigment-producing cells and cause these cells to die. Another theory is that melanocytes destroy themselves. Finally, some people have reported that a single event such as sunburn or emotional distress triggered vitiligo; however, these events have not been scientifically proven as causes of vitiligo.

What are the symptoms vitiligo?

People who develop vitiligo usually first notice white patches (depigmentation) on their skin. These patches are more commonly found on sun-exposed areas of the body, including the hands, feet, arms, face, and lips. Other common areas for white patches to appear are the armpits and groin, and around the mouth, eyes, nostrils, navel, genitals, and rectum.

Vitiligo generally appears in one of three patterns:

1. focal pattern -- depigmentation limited to one or only a few areas

2. segmental pattern -- depigmented patches that develop on one side of the body

3. generalized pattern -- the most common pattern. Depigmentation occurs symmetrically on both sides of the body.

In addition to white patches on the skin, people with vitiligo may have premature graying of the scalp hair, eyelashes, eyebrows, and beard. People with dark skin may notice a loss of color inside their mouths. 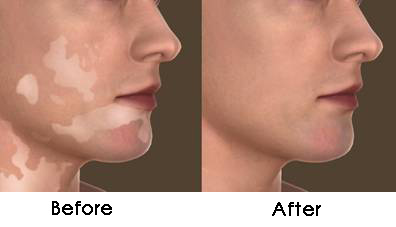 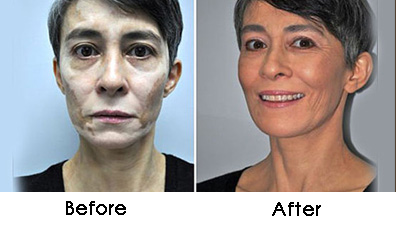 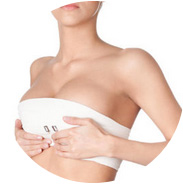 Breast augmentation utilizes FDA approved silicone or saline breast implants to enhance the shape and size of the breasts. 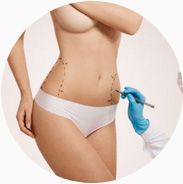 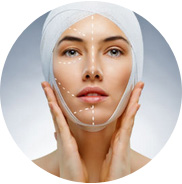 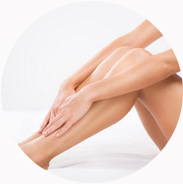 Skin tightening procedures can be performed on nearly any part of the body to improve the elasticity and texture.